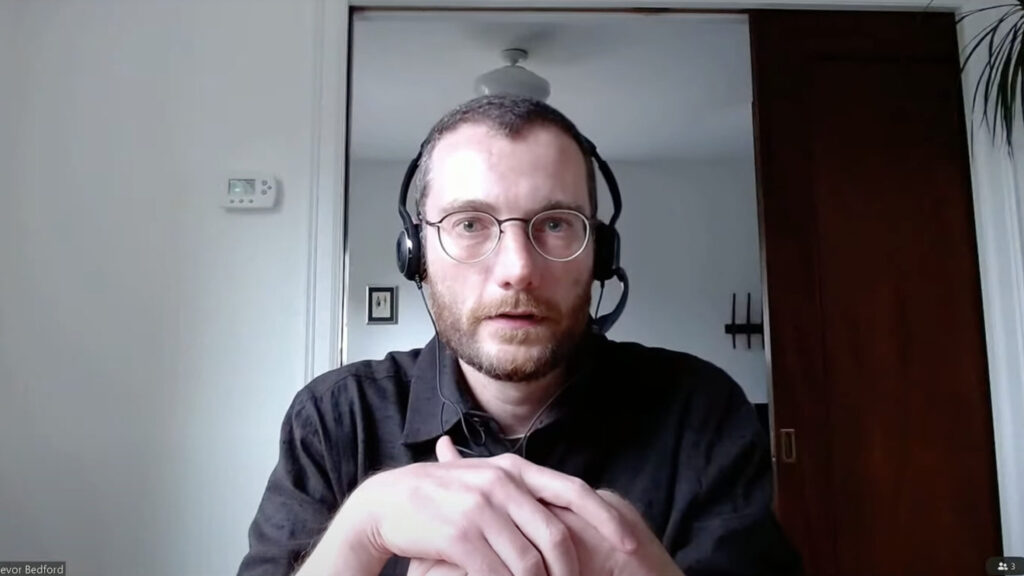 In January 2020, computational biologist Trevor Bedford told STAT’s Helen Branswell about the then-new coronavirus: “If it’s not contained shortly, I think we are looking at a pandemic.”

Talk about a prediction.

Last week at the 2021 STAT Summit, Branswell again caught up with Bedford, a scientist at the Fred Hutchinson Cancer Research Center and an expert on viral evolution and epidemiology. They talked about the future of the coronavirus and antigenic drift (essentially, whether the virus mutates in ways that escape the protection generated by vaccines or earlier infections), as well as what’s in store for flu season, and what might lie ahead with the next pandemic.

Excerpts from the conversation are below, lightly edited for clarity.

HB: With the evolution of the virus, the feeling has been that transmissibility was going to top out and future mutations were going to be about evading immunity. What do you think?

TB: The variants have felt like this 2021 thing, where suddenly there’s all kinds of variants and now everything is Delta. But if you look at the actual evolutionary history, the real relevant evolution that created these variant viruses was happening in 2020 — the very first Delta virus existed in October 2020 — and it was in 2021 that they really spread and competed.

I’m pretty confident that the rate of adaptive evolution has slowed in SARS-CoV-2 since then, but whether it’s leveled off or how much more is there, I’m not sure. I do expect a transition in the next, I don’t know, year or so, to more of this antigenic drift rather than this continual increase in transmissibility.

In terms of antigenic drift, which is a term we often use in flu to describe the way the virus is changing to evade vaccines, do you think that given what we’ve seen with SARS-2, that this is a virus that is going to force us to update vaccines on a regular basis?

If you look at seasonal coronaviruses [which cause common colds], we don’t have vaccines for them, but if you look at their rates of evolution, they look a lot like influenza B viruses. Flu B vaccines need to be updated every five or so years, so that would probably be my low end for expectations for SARS-CoV-2. In the last year and a half, it’s been remarkably evolvable. The actual rates of adaptive evolution have been perhaps five times that of the fastest influenza A [viruses], and perhaps 10 times that of the seasonal coronaviruses, though again that has slowed down.

My median expectation is something more like H3N2, based upon what we’ve seen, where we update the vaccine every year or two, though I would totally buy something like flu B where the vaccine needs to be updated every five years or so.

The impact of that will depend on how long immunity lasts, the protection we get from vaccines or from infection. Given what’s known so far, can we hypothesize about whether or not that means we’re facing annual boosters or every five years, something more like tetanus?

If I had to guess, there would be a booster offered every winter season.

When is this likely to be less disruptive? When will we reach a point when SARS-2 and humans can coexist more easily?

Without the variants, we would have been to endemicity this winter, but the emergence of Delta and that wave has changed things. It’s made this season a bit funny, but I would expect that next winter, 2022-2023, looks like winters are going to look.

[Going forward], if it’s quite transmissible, and it evolves as fast as flu, and there’s waning immunity, and even breakthrough infections do sometimes result in severe outcomes, you end up with something that looks worse than a normal flu season. Super ballpark numbers would be more like 50,000 deaths, maybe even 100,000 deaths a year. That’s not so much worse than seasonal flu, which has on average 30,000 deaths a year, and occasionally 50,000 or even more. But we haven’t done much with seasonal flu. We recommend that people get the vaccine, and half the population does so. It’s hard for me to judge how we’ll respond as a society if those are the health impacts that are happening each season.

Influenza has effectively been absent since March 2020. At a point, it will return, and then we will have two of these things.

I have some hope that we’ll stabilize at less flu circulation than pre-pandemic, if we improve building ventilation, if we’ve slightly normalized people staying home if they’re sick. Not even huge things — we’re not talking about lockdowns. But I think that will have some impact on flu circulation. It’s not going to eliminate it, but I could hope for less flu circulation into the future.

Listen: A resident physician on the Covid-stoked fire that burned him out

Last year, there were warnings about a twindemic of Covid and flu, which did not materialize. Flu activity is still pretty low, but the things that have seemingly helped keep it in check — mask wearing and the dramatic reduction in international travel — those are starting to ease. Do you think we’re likely to see a true flu season this year? Or will it be next year before flu season makes its full return?

If you look circulation right now compared to a normal year, it is way low. The only flip side there is that University of Michigan has just had a very large campus outbreak of H3N2 [a type of influenza A]. That would presage that maybe we’ll see something pick up as the season goes on. Based on timing, I’d expect that it couldn’t ramp to be a very large season, because it takes time for that to happen. If I had to guess, it would be that yes, there will be a flu season this year, but it’ll still be smaller than an average pre-pandemic season.

What do you see as the important lessons to take from this pandemic?

Maybe super broadly, that for early pandemic warnings, you want to be identifying the new spillover event early on. I do think that that will has improved — you can think, globally, of how much capacity and sequencing exists that didn’t exist two years ago. We will be more poised to detect something than we were before the Covid pandemic.

How that translates into actual response, that’s trickier. In terms of the actual public health response, that seems like it’s been tricky in so many places in the world.

Do you feel we’re better prepared for the next pandemic? Please keep in mind I’m not just asking you about the science foundation for responding, but also the human foundation.

If I had to guess that, globally, we’re better off. In the U.S., I’m not quite as sure, given political divisions, etc., if something were to emerge in 2022. But that’s hard to speculate on.