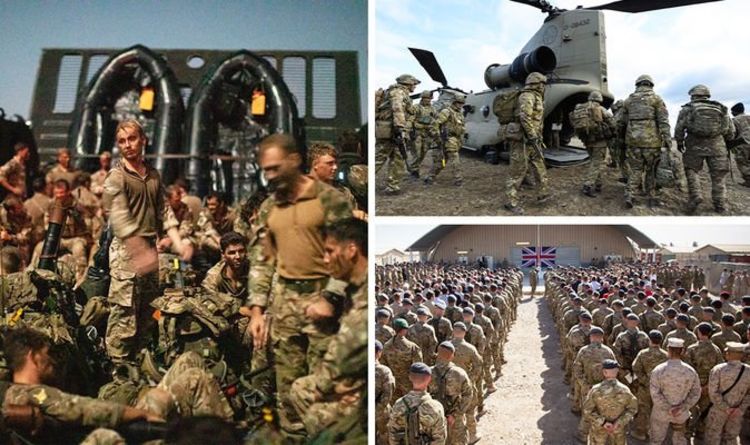 It comes as experts warn the state of current cuts, due to be confirmed next month, have already rendered the service incapable of defending against Russian aggression.

One ex-general said they would leave Britain “sticking up its bottom and inviting anyone who wishes us harm to park their bike in it”.

Under last March’s Defence Command Paper the 80,000-strong Army will shrink 11 percent to just 72,500 troops by 2025 with tanks, and artillery scrapped and land sold as it attempts to meet the challenges of future warfare.

While the Royal Navy, which recently provided the new Chief of Defence Staff Admiral Sir Tony Radakin, is firmly at the centre of the government’s largely maritime Global Britain ambitions, the Army  – once so dominant in Afghanistan and Iraq – has now firmly become “the runt of the litter”, said Gen Sir Richard Barrons.

In terms of equipment, the writing is already on the wall.

The scrapping of 227 Challenger 2 tanks will leave just 148 more capable Challenger 3 tanks; hundreds of AS-90 artillery guns will go with no replacement; 600 Warriors – essential for allowing infantry to operate with tanks, are due to go by 2025; 200 Scimitars, still being used, will go; a contract for 400 US-made Joint Light Tactical Vehicles (JVLT) has been cancelled and Ajax –  a deep reconnaissance and strike vehicle heralded as the cornerstone of the British Army’s new posture – is mired in technological problems and may be also be scrapped.

Plans to reduce the army’s size to around 65,000 had already been floated before the publication of the Defence Command Paper, but were rejected because of a £16.5bn cash boost.

However that money, spread over the three years, is said to be the amount needed to fill the Ministry of Defence’s “funding back hole”.

The new proposals have already been briefed to commanders and will be discussed by senior brass at a meeting held by Chief of the General Staff Gen Sir Mark Carleton-Smith next month, following what is anticipated to be a “harsh hand” by Chancellor Rishi Sunak in the budget on October 27.

Speaking last night Gen Sir Richard Barrons, who led Joint Force Command until 2016, said: “We know the army must invest much more heavily in air and missile defence, long range precision firepower, protected mobility suitable for urban areas and which can operate in a way which can disperse, because large armoured formations are just targets now. We saw in Ukraine that Russia can destroy them in just 20 minutes. Hiding in the woods just won’t cut it.

“The problem is that we don’t have anything yet to replace these things with. It means the British Army will face a ten year strategic gap, whereby what you’re left with is a gendarmerie that won’t cut it against peer and state capability, that is no good against Russia and won’t make a meaningful contribution to Nato.

“This equipment exists and if we cannot produce it, we must buy it. We simply cannot afford to wait ten years while we work this out, or we will find ourselves lying on the ground and sticking our bottom in the air and inviting anyone who wishes to do us harm to to park their bike in it.”

Robert Clark, defence expert with the Henry Jackson Society thank tank, said: “The backbone of the British army over the last 75 years has been to provide a conventional deterrent by armoured war fighting division, That is now obsolete.

“We have two tank regiments, which is laughable, a replacement for an infantry fighting vehicle which is nowhere in sight and our reconnaissance vehicle, Ajax, is inundated with delays.”

He said that while the army was focusing on capabilities such as ‘information manoeuvres’, ‘combined operations’ and ‘integrated domains’, “you cannot deny territory and kill the enemy with a laptop or from space, nor can you protect global interests in Europe, the Indian Ocean and Pacific without a capable and credible infantry.

“From this point on, the British army will no longer be able to field an armoured brigade, either with allies or isolation.

“What we are left with it a force that can do national resilience – if too many regional bases aren’t axed – training missions abroad, fight in greyzones with the new Rangers Regiment and that’s it.:”

Former Chief of the General Staff Gen Lord Dannatt said the appointing of Admiral Radakin as CDS showed how the army “was not in a very happy place right now”.

He added: “It seems the British army is going in the same direction that the Canadian army took 20 years ago, when the decision was made to focus on peacekeeping while soft-pedalling war fighting.

“But they discovered that if you allow your fighting core to be eroded, your peace-keeping skills aren’t much good either and in 2006 they kicked themselves into becoming more capable again.”

Asked about the proposed 22 percent cut, an Army spokesman said: “In the Spring it was announced in Parliament that the Army would be restructured to meet future threats as we implement the outcomes of the Integrated Review.”

“The plans for structural reform are not yet finalised so speculation at this stage is unhelpful and misleading. Detailed plans will be submitted to Ministers later this autumn and decisions made public when finalised.”