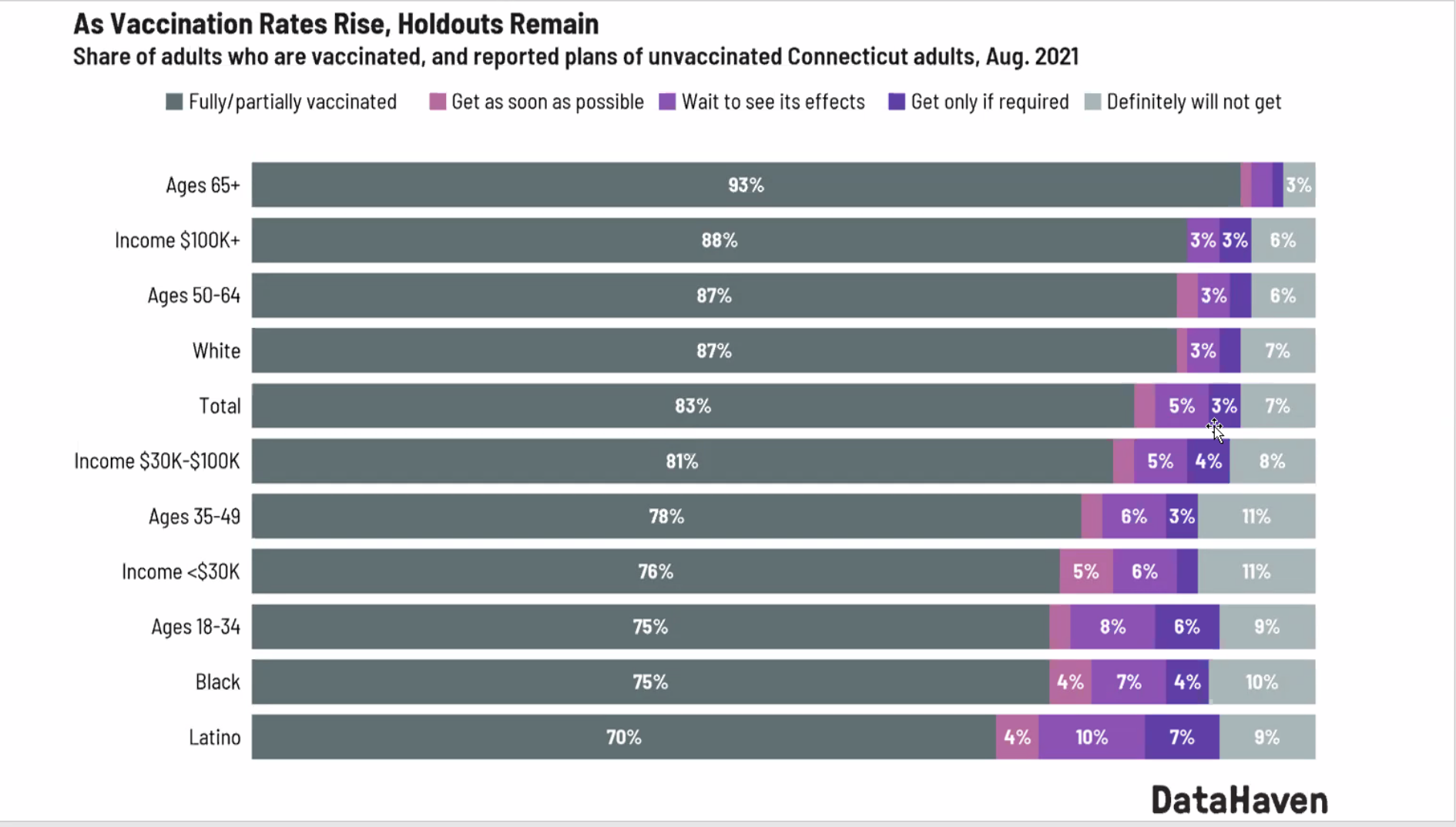 The coronavirus exacerbated the state’s existing economic and racial inequities, and pandemic recovery continues to be a tale of two Connecticuts as Black and Hispanic residents report lower rates of vaccination and higher rates of housing, food and economic insecurity, according to figures provided by DataHaven.

As of the end of September, 64% of all white residents reported full vaccination, compared to 46% of Black residents and 52% of Hispanic residents, according to data from the Department of Public Health. The rates of vaccination by race for the state’s racial minorities may be undercounts because a number of state residents put down “Non-Hispanic Other” when asked for their race.

Vaccination rates also drop with age; the DataHaven estimates that 35% of those between 18-35 will not get vaccinated.

The state, hospitals, universities and nursing homes have implemented vaccination mandates during the period that the survey was conducted. In the hospital industry, preliminary data show that those mandates have pushed the majority of the previously unvaccinated to get a shot, The Connecticut Mirror previously reported.

“The governor issued a series of executive orders that set in motion vaccine mandates for state employees, for long-term care facilities, in particular nursing homes, and assisted living facilities, as well as for K-12, educators and early childhood daycare providers, and so we’ve kind of been in the throes of implementation over that,” the state’s chief operating officer Josh Geballe said.

National data show that those without health insurance make up a disproportionate number of the unvaccinated, suggesting that the health care system’s general inaccessibility may be contributing to vaccine hesitancy.

“Lack of health insurance usually means an individual has no regular doctor or trusted health care establishment and instead skips medical or dental care when needed,” the release states.

The survey found that Latino and low-income state residents were less likely to report health insurance coverage and usage of health care services in general. Vaccine uptake has closely tracked  socioeconomic indicators such as poverty, income and education level, The Mirror previously reported. Nearly one-in-five low-income residents said they would get a vaccine as soon as they could.

About a quarter of Connecticut residents reported job losses within the past year, but the percentage of those who would like to work more than they are “has fallen back to the pre-pandemic level of 13 percent,” the release states. Under 50% of Black and Hispanic respondents said they “believe there are options for suitable employment nearby.”

While vaccination is widely considered the best defense against COVID-19, the delta variant has exposed the limitations of vaccination in isolation in preventing surges at present. Overall mask usage in the state is lower than in 2020, which mirrors policy changes on the state and federal level. The governor has allowed towns to decide for themselves whether to impose mask mandates. A higher fraction of Black and Hispanic state residents, as well as low-income individuals, reported masking on a regular basis. Those groups are overrepresented in “essential jobs” and are also more likely to reside in Connecticut’s larger cities, many of which have mask mandates in place.

In general, Connecticut residents reported more faith in local health officials than other government institutions. The federal government scored the lowest on trust, though the numbers are up from the Trump years, the release states.

The federal government has also played an active role in the distribution of aid during the pandemic. “The improvement in financial and food insecurity from 2018 to 2020 may be partly explained by federal stimulus payments and the expansion of unemployment benefits due to the coronavirus pandemic,” the release states. “Nevertheless, 1 of every 4 Connecticut adults report facing financial difficulty, and 1 in 10 report being unable to afford food.”

“Housing insecurity registered an uptick in 2020, and has grown overall since 2015, suggesting that housing costs remain out of step with families’ abilities to pay,” the release states. 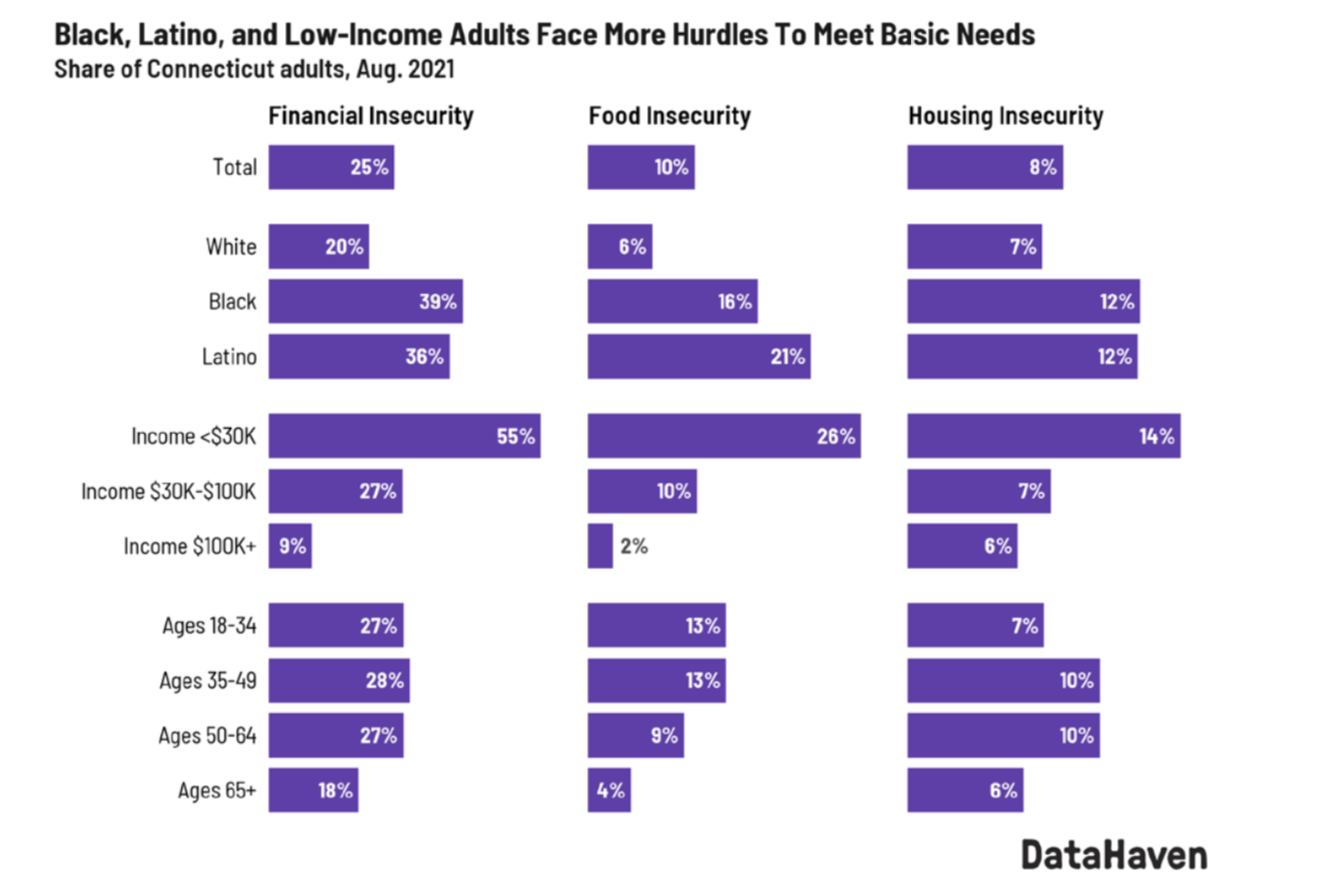 The survey was conducted in partnership with Siena College Research through live calls in English and Spanish to randomly chosen phone numbers. “The overall survey carries a maximum margin of error of +/- 1.6%,” DataHaven’s press release states. “Results are weighted by age, gender, race/ethnicity, and geography” to be representative of Connecticut’s population, the press release states.

“Our plan is to do more in-depth stories or analyses on specific topics as we continue to interview thousands of residents throughout this year ,” Executive DataHaven Director Mark Abraham wrote.

Read more about the data here.