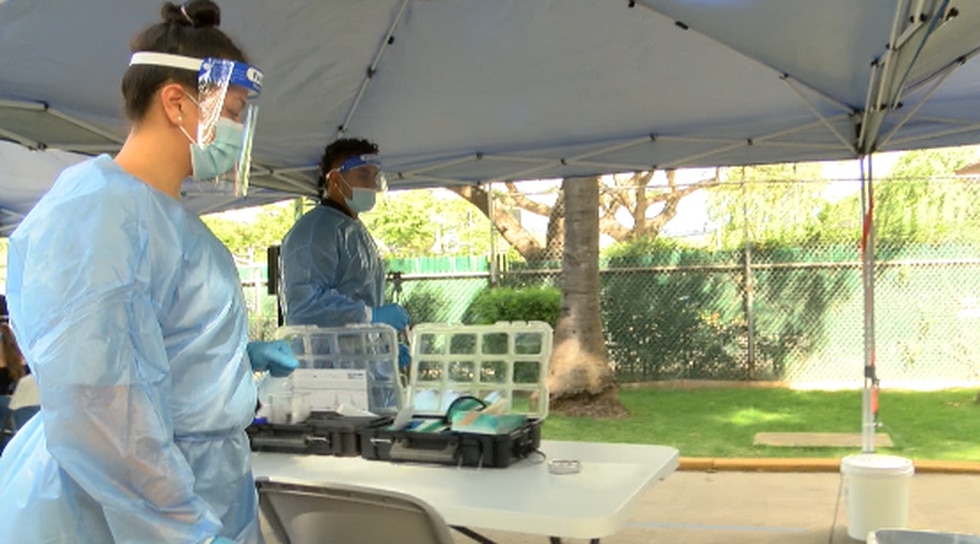 HONOLULU (HawaiiNewsNow) – Statewide and county test positivity rates have dipped according to the latest numbers Friday from the state Health Department. It’s a key metric of the pandemic, but scientists are urging caution.

The World Health Organization first declared Omicron a variant of concern on Nov. 26 and the statewide average positivity rate shot up in Hawaii in December. The highest was on Jan. 10 at 20.7%. The latest figure comes Wednesday at 19.9%, but the impact keeps growing.

Businesses across the board have been hit hard by staffing shortages from the omicron surge.

“Staffing wise we’ve lost 20% of 23 employees,” said Dr. Jason Ching, a pediatric dentist in Pearl City. He says workers must test to come back and he’s hoping for some sort of normal.

“Typically it ends up being 7 or 10 days that they are out,” said Ching.

Honolulu Mayor Rick Blangiardi says he has encouraging words after a meeting yesterday with other mayors and medical experts from Harvard and Johns Hopkins Universities.

“We expect that this will peak sometime between now and the end of the month and then cases will start to decline. We heard yesterday rapid rise, rapid decline,” said Blangiardi.

Hawaii scientists with the Hawaii Pandemic Applied Modeling Group say they’ll have better idea next week if Hawaii has hit its peak.

“Hopefully that’s the case, but once again we really can’t say for sure until we have 3, 5 days worth of data,” said Thomas Lee, UH epidemiologist and HiPAM co-chair.

“There are models predicting a very large number of cases compared to what’s actually been tested and counted that indicated a likely undercounting of cases,” said Victoria Fan, UH Associate Professor of Health Policy and HiPAM co-chair.

“That’s very concerning so while it has been decreasing on Hawaii island, it’s been increasing somewhere else so there may be some island that may go down or peak earlier. I think it is something to be watched very, very carefully,” said Monique Chyba, UH mathematics professor with HiPAM.

While most experts say COVID is here to stay, many wonder when it’ll be an illness that doesn’t cause widespread disruption.

“I think for scientists to admit that we don’t know is a very healthy state of mind, When it will be endemic,” said Fan.

Hawaii scientists say given the 1918 Spanish flu and other historical data, a pandemic could last 2 to 4 years and we just started year three.