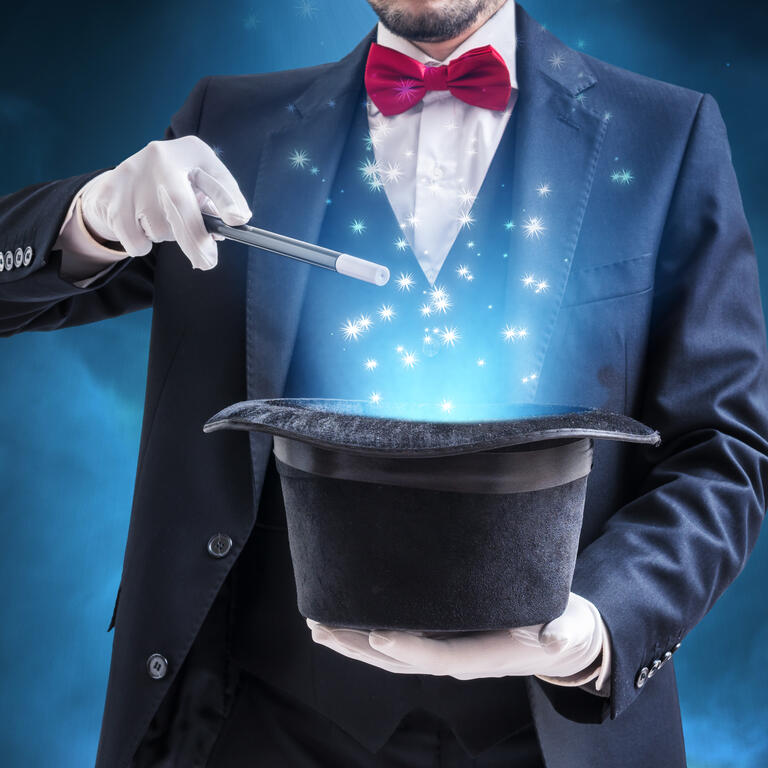 Sea Limited (NYSE:SE) has been one of the top sought-after pandemic plays. Both of its two engines – gaming and e-commerce – are key beneficiaries of the COVID-19 measures such as study/work-from-home. SE stock was already a solid performer pre-COVID, with gains surpassing that of its Chinese peer, Tencent Holdings (OTCPK:TCEHY) (OTCPK:TCTZF), and Latin American peer, MercadoLibre Inc. (MELI).

Over the past three years, Sea Ltd. has seen its share price soar more than 3000 percent. After recent declines, SE stock is still up over 17 times from late December 2018. In the same period MELI stock is up 2.8 times while TCEHY stock is up only 47 percent. 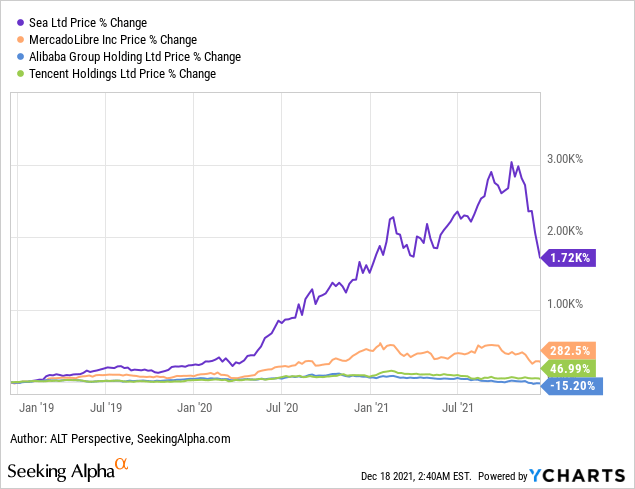 Strictly speaking, Sea Limited doesn’t have an equivalent among the large internet companies. Its gaming business is highly profitable, enabling it to fund its heavily loss-making e-commerce and fintech units. MercadoLibre hosts the largest online commerce and payments ecosystem in Latin America and it doesn’t count gaming as a core business.

Sea Limited’s peers in Southeast Asia are also having different backgrounds. Grab Holdings Limited (GRAB) started as a ride-hailing platform and subsequently branched into fintech and on-demand delivery including groceries. Indonesia’s GoTo Group (GOTO-INDONESIA) is formed from the merger of the two largest startups in the country – ride-hailing giant Gojek and e-commerce company Tokopedia.

Thus, the uniqueness of Sea Limited, particularly the ability to leverage its cash cow gaming unit to grow new businesses, has seen investors flocking to this tech firm halfway around the globe from the U.S. However, the growth at its gaming unit, Garena, which the company categorizes as Digital Entertainment, registered a dramatic slowdown in the third quarter of 2021.

Although the gross orders and GMV metrics are still showing healthy growth, the e-commerce unit’s EBITDA is getting more negative by the quarter. The total adjusted EBITDA for Sea Limited has flipped to negative this year. In other words, the profitable gaming business is no longer able to offset the escalating losses from the e-commerce and digital financial services divisions.

At the same time, share-based compensation continues to rise steadily. Competition in the region is also heating up, with GRAB coming to public view following its merger with a SPAC, and GoTo Group eager to show solid growth figures in the prelude to its IPO.

Hence, while I’m late to the warning party, with the SE stock down 42 percent from its recent peak, the steepest fall since it became publicly traded, I believe there could be further downside over the months ahead. 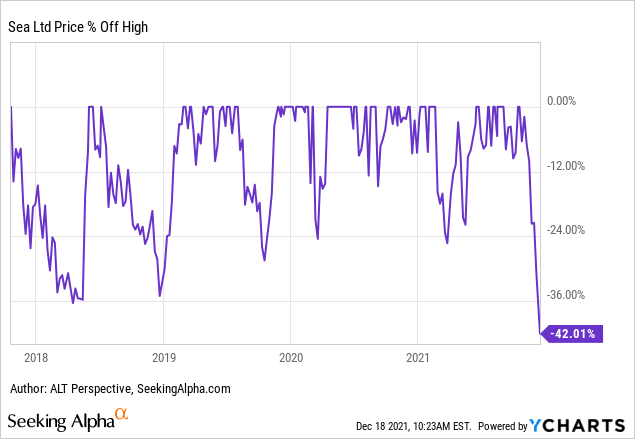 Thus, the motivation of this article is to delve deeper into the seemingly incomplete picture provided by the results presentations to understand the health of Sea Limited’s e-commerce business. I will also highlight the ballooning losses as the divisions named E-Commerce and Digital Financial Services scale up.

GMV growth tells only a partial (and possibly erroneous) story

While the growth figures look all fantastic, we need to understand the gross order numbers have been increasing at a faster pace than the GMV. In other words, the value per transaction has been declining steadily. The GMV per gross order has fallen from $13.3 in Q3 2020 to $9.9 in Q3 2021. I estimated this to reduce further to around $9.3 for the final quarter of 2021 if the trend continues. 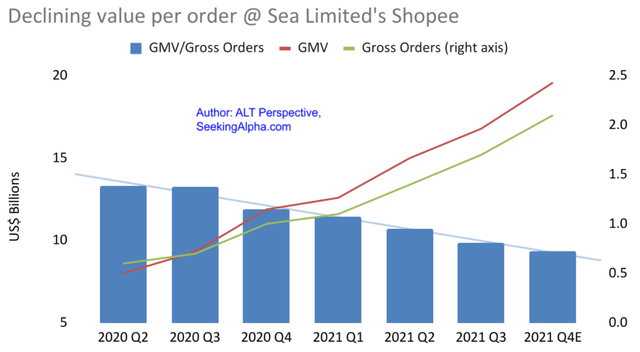 A smaller value per order may help Shopee gain from transaction-based fees. However, it’s hard to see how the rising prevalence of lower value items helps with monetizing value-added services and advertising revenue over the long run.

For now, Shopee is still reporting healthy monetization, with GAAP revenue as a percentage of total GMV rising to 8.6 percent from 6.7 percent in the third quarter of 2020. GAAP e-commerce revenue grew 134 percent from last year to reach $1.5 billion.

To reverse the shrinking GMV per order trend, Shopee would need to sell larger ticket items like luxury products. Shopee recognizes this and it launched Shopee Premium, a delicate section on Shopee for select brand partners in the luxury segment, a year ago.

It remains to be seen if Shopee can improve the user experience sufficiently to entice users to shop luxury items on its app. In its present form, based on my experience and the feedback I gathered from friends, navigation on the Shopee app can be frustrating at times and the product information page leaves much to be desired.

Nonetheless, we are flocking to Shopee for the great bargains offered on the platform. There are plenty of deeply discounted items during “flash sales” periods, which have become increasingly prevalent. Would users return to Shopee when it stops being aggressive on promotions and if competing platforms turn on their respective campaigns?

Unless the luxury products are heavily discounted, I question why users would buy on Shopee otherwise, at least based on the current interface. Then again, luxury brands wouldn’t want to sully their image with steep offers on Shopee, or Shopee Premium, for that matter.

A lower GMV per transaction would also imply that Shopee’s operating cost could be rising, considering the larger bandwidth and processing efforts required in handling the growing orders.

GAAP e-commerce revenue growth is healthy and even outpacing the GMV growth. That means Sea Limited’s Shopee is increasing its monetization. However, is all well and good?

Sea Limited’s total revenues have risen rapidly over the past years, but so have its losses. Just looking at the cost of revenues and total operating expenses, these have soared, growing exponentially in recent years. If we just obsess with growing sales at all costs, then we can ignore the escalating losses. 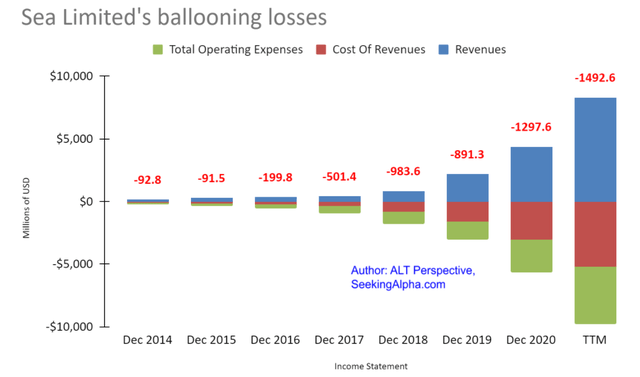 However, can shareholders be comfortable with the skyrocketing losses over another few years? Sea Limited looks set to end 2021 with a larger loss than last year, which already saw a substantially higher loss than 2019. One major driver of this is the inability of the Digital Entertainment division to offset the losses from the other two core business units – E-Commerce and Digital Financial Services. This resulted in the total adjusted EBITDA sinking to a negative $165.5 million in the third quarter of 2021 compared to a $120.4 billion gain in the same period last year. 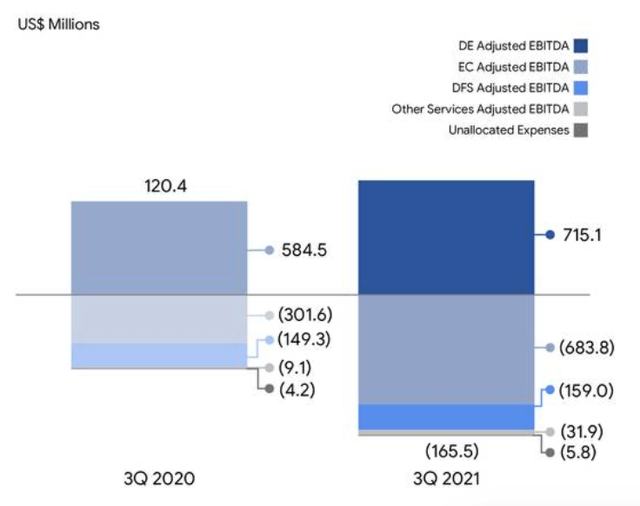 We often hear the bear case saying that if these pandemic beneficiaries cannot turn their economies of scale into profitability with this massive tailwind, when will they ever? Despite ever-rising revenues, Sea Ltd. has been posting a downtrend in its operating income and net income. Sea Ltd.’s net income reached a staggering $1.95 billion on a trailing twelve-month basis as of the third quarter of 2021. 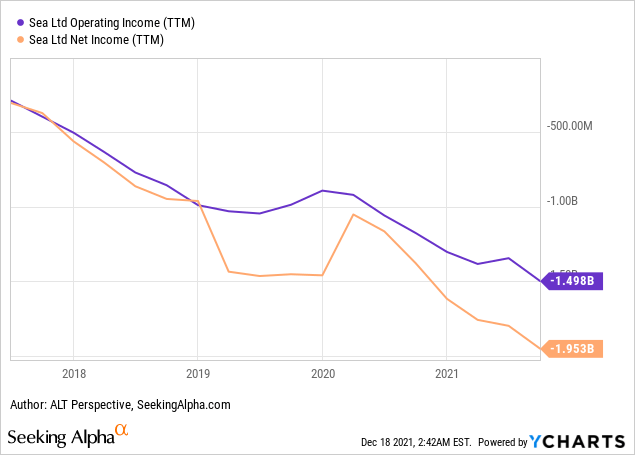 The bull camp can defend Sea Limited saying it is still investing in user growth and new businesses. That’s fair. However, are shareholders aware that Wall Street analysts have projected a significant slowdown in Sea Ltd.’s revenue growth? On a consensus basis, its Q4 2021 revenue would slow further to 93.5 percent and the subsequent quarters will continue the deceleration to post 16.1 percent year-on-year growth by the fourth quarter of 2023. 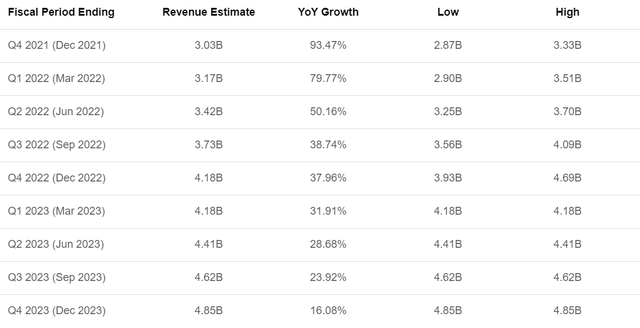 The bulls could argue that Sea Limited has a strong track record of surpassing the consensus revenue estimates. In the 16 quarters of posting earnings as a public company, it has only one miss (Q1 2021) and that was a very minor one. This suggests that analysts have been conservative in their forecasts on Sea Limited and there is room for upward adjustments in the coming quarters.

However, if Sea Limited maintains its breakneck revenue growth while its profitability doesn’t improve to a positive in the coming years, analysts and shareholders would be hard-pressed to find a convincing reason to keep their faith in the company. According to the consensus estimates, Sea Limited wouldn’t see a positive profit before 2024.

The largest-ever miss was in March 2020 where the reported EPS was 78.9 percent lower than the consensus. This meant that the above analyst estimates for its EPS could be optimistic and Sea Limited may not see a positive profit even in 2024 or 2025.

Hedgeye recently named Sea Limited as its best idea short. The research firm called Sea Limited’s flagship game Garena Free Fire a “one-hit wonder whose performance has peaked.” The profit from Garena is already unable to cover the losses from the other units in the past quarters. If Garena falters, the ability to ‘subsidize’ the e-commerce and fintech arms would diminish further. Constraining the freewheeling ‘spending’ for the latter two units may result in slower growth that reverses the bull camp’s thesis.

Never mind the widening losses, shareholders can wait, the management might have reasoned. Meanwhile, Sea Limited remains generous with its share-based compensation [SBC]. The SBC is projected to rise to $133.4 million for the final quarter of 2021. This is a sharp rise from the mere $34.9 million given out in 2019 4Q. 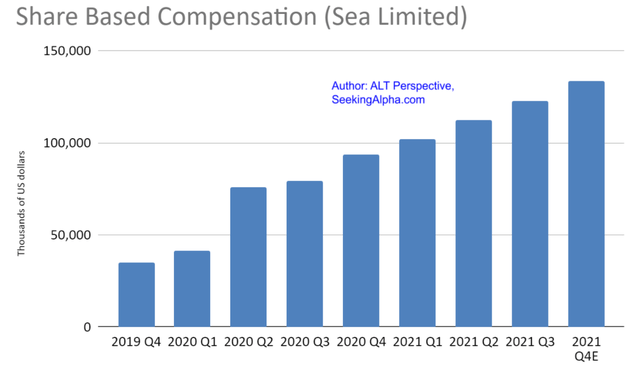 It may be worthwhile to note that the outstanding shares count of Sea Limited has doubled from 2017. In September, the company made a direct public offering of 11 million American Depositary Shares and 0.25 percent convertible senior unsecured notes with an aggregate principal of US$2.5 billion. 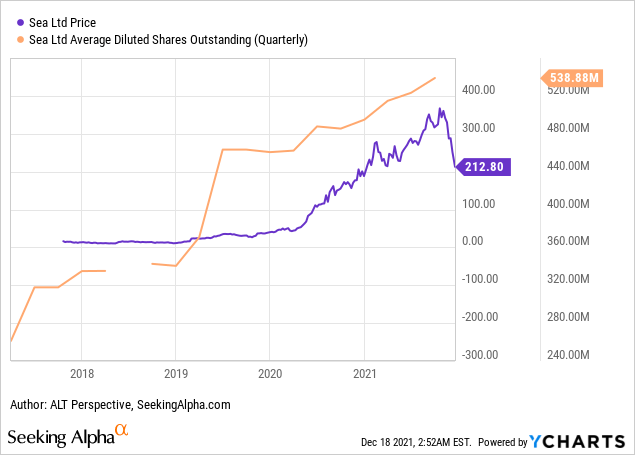 Sea Limited said then that it planned “to use the net proceeds from the Offerings for business expansion and other general corporate purposes, including potential strategic investments and acquisitions.” Could its international expansion endeavors support Sea Limited in perpetuating its high-growth story? At the expense of escalating costs amid a reckoning of pandemic stocks?

I will look into its global push prospects in a follow-up article. Meanwhile, I will be looking forward to reading and responding to readers’ comments on the arguments put forth in this article.