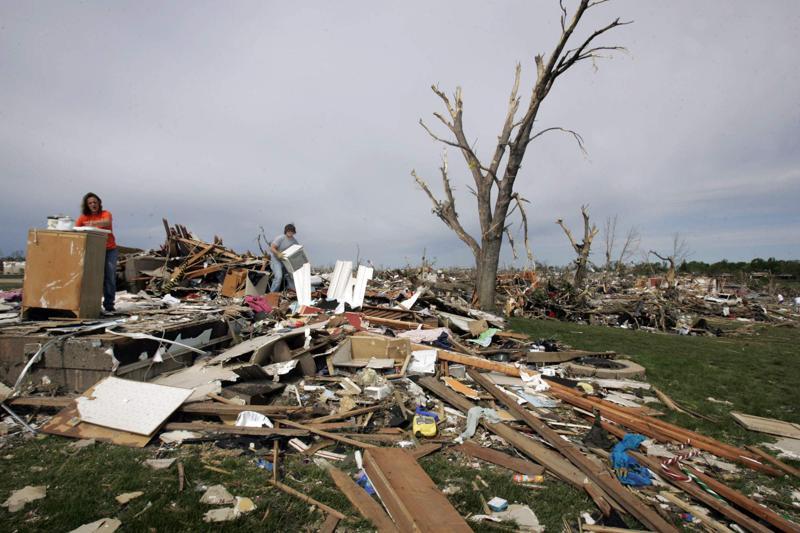 In a May 26, 2008, photo, Brittany Moore (left) of Parkersburg, and Ian Johnson, of Nashau, pick through what is left of their friends’ home a day after a fatal tornado demolished the southern portion of Parkersburg. (The Gazette)

PARKERSBURG — After a killer tornado in 2008 and the murder of a beloved community leader a year later, many people in Parkersburg felt they could take just about any punch thrown at them.

Then came the pandemic. It claimed lives and took a bite at businesses.

But as was the case with those previous tragedies, the people of Parkersburg weren’t about to be defined by this latest challenge. Instead they defined themselves by what they would do to overcome.

The pandemic was more insidious than the May 25, 2008, tornado that claimed six lives in the city and two in neighboring New Hartford. It was less shocking than the 2009 shooting death of Aplington-Parkersburg High School Football Coach Ed Thomas.

The pandemic claimed, over the course of a year, roughly as many lives in town as the tornado. While the pandemic didn’t do property damage, it stalled businesses nonetheless, under a state-ordered shutdown.

The town persevered. Parkersburg had several efforts in place that allowed it to fight its way through, including a strong sense of community.

This is a common trait among small towns that are persevering despite trends of rural decline. IowaWatch spent four months examining traits of towns with 5,000 or fewer residents. This included visits to 58 small towns that are bucking declining population trends. These towns rely on commitment from residents, businesses banding together, a mix of state and local funding, strong schools and a sense of community, IowaWatch found.

While many rural towns suffer from declining populations, Parkersburg grew. It had 2,015 residents in 2020 compared with 1,870 in 2010, according to U.S. census data. IowaWatch looked at communities gaining population but also those that had strong main streets and other traits leading to success.

In Parkersburg, these traits include invested leaders and volunteers, strong schools, a that strong sense of community.

John Luhring started Parkersburg Hardware and Garden Center in 2018. Deemed “essential” during the pandemic, his business helped other community businesses by buying and handing out gift cards. (Pat Kinney/IowaWatch)

The store thrived, as people limited their travel to nearby larger cities and kept their commerce closer to home. Luhring, buoyed by his success, bought gift cards from several local businesses, including some which had been shuttered during the pandemic. He gave those cards away to his customers, encouraging them to support those local businesses — if not immediately, then when they were able to reopen.

“Last year, during the pandemic, because so many businesses were forced to be shut down, I just felt so blessed that I was able to be open. I started with a local hair salon. I literally took cash from our business, and I gave it to the local hair salon and said, ‘Give me a gift certificate.’ ”

He didn’t stop there. Car dealerships, the grocery store. Then others started doing it. ““For me, it was just a ‘pay it forward,’“ Luhring said.

As Luhring saw, buying patterns may have permanently altered to the benefit of local businesses, said Dan Bruns, a banker who’s on the City Council.

“One of the challenges we faced with local businesses was getting people to shop locally. The pandemic has changed that, from the hardware store, from the grocery store, you can get the same things here and you don’t have to drive. People need to recognize that every dollar that’s spent in this community is a dollar that stays here,” he said.

Bruns said people in town possess a quality that is hard won.

“It’s grit,” he said. “We learned a lot. We learned a lot after the tornado. Some things are out of your control. The pandemic’s the same way. You do what you need to do to be safe, and try to help people as much as you can,” he said.

Gov. Kim Reynolds in March 2020 shut down schools and limited some business. The first coronavirus cases in Iowa were recorded March 8, 2020.

Parkersburg kept the public library open to check out items, even if people couldn’t linger inside. In the summer, it kept pools open on a limited basis, with advance sign-up for a limited number of kids at a time in two-hour shifts.

At the bank, Bruns said, the staff reached out to customer while walk-in business was closed. A holiday open house and senior customers’ social clubs stopped gathering during the pandemic.

“For some people, coming into the bank and talking to someone for five or 10 minutes while making a deposit could be their only communication with the outside world. If you take that away because of the pandemic … there’s just some things that we needed to do. We tried to be as proactive as we could.”

The bank also processed more than $2 million in Paycheck Protection Plan loans for businesses. “I think it goes back to neighbors helping neighbors. That’s what we did after the tornado,” he said. “And I hate for Parkersburg to always be associated with that tornado. But it’s going to be. EF5, half the town destroyed. We learned a lot of things from that.”

He continued: “We’ve seen tragedy, we’ve seen crises, we’ve seen obstacles that others maybe haven’t. And again, it’s a testimonial to our grit,” Bruns said. “I don’t want to say the pandemic was easy. Because it wasn’t. But it was definitely easier than a tornado.”

A metal cross, bent by the more than 200-mph winds of an EF5 tornado that in 2008 tore through Parkersburg, remained askew a decade later in 2018. (Rebecca F. Miller/The Gazette)

IowaWatch reporting in this project was made possible by support from the Solutions Journalism Network, a nonprofit organization dedicated to rigorous and compelling reporting about responses to social problems. IowaWatch == The Iowa Center for Public Affairs Journalism is a nonpartisan, nonprofit news outlet that strives to be the state’s leading collaborative investigative news organization. Read more or support its mission at iowawatch.org.