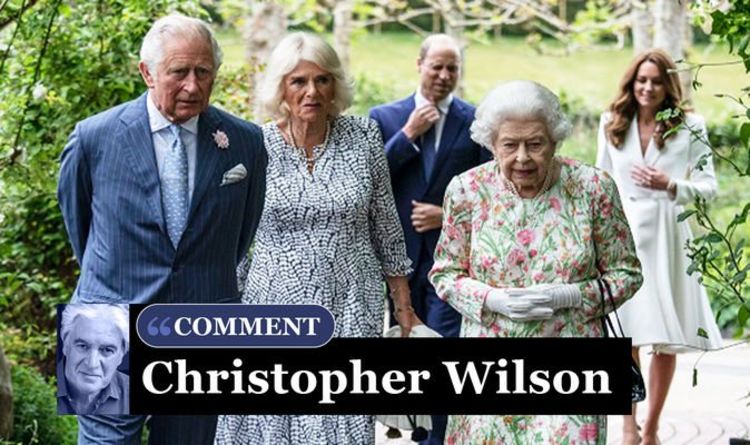 The Queen and Prince Charles are often to be seen side-by-side, while Kate, Camilla and the Queen travel to Scotland next month for the COP26 summit in Glasgow. These are jobs which once would have been attended by a single generation of royals – now it’s two and sometimes three. The national emergency of the past 19 months has brought a greater need from the nation to engage, when possible, with our first family.

A royal visit always works wonders on morale and the House of Windsor has obliged. Photographers are having to work overtime.

The other side of the coin is the defection of Prince Harry and the scandal surrounding Prince Andrew, two separate crises that have struck at the heart of monarchy and caused the remaining members to close ranks, think afresh and reboot their act.

As a strategy it’s working, and working well. More positive news flows daily than ever before, and as a result the institution is looking less shaky than it was a few months ago.

Behind the smiles and the waves, however, lies a strategic recalibration to take account of the uncertainties next year, which is likely to prove the most challenging yet to face the Queen since she came to the throne.

Without the constraints of public duty, there’s no knowing what the Sussexes might do next.

Their supporters point to the fact that Harry and Meghan’s declared aim is to do good for the world, but there’s barely a day when they don’t dent the royal escutcheon back home.

The impending trial of Ghislaine Maxwell, and the ghost of Jeffrey Epstein, hang over the royal house like the Sword of Damocles, dangling by a thread.

Last weekend PrinceWilliam revealed, as far as he’s concerned, the Duke of York is no longer a working royal and, whatever Prince Andrew’s ambitions, his days in public life are over. For many this comes as a relief, but it sharpens the focus on the diminished number of royals left.

the Queen, last week attending a service for the Royal British Legion at Westminster Abbey, was supported by a walking stick: a jolting reminder that she will be 96 on her next birthday.

But her acid COMMENT at the Welsh Assembly about climate-change countries who “talk but don’t do” shows just how sharp her mind remains. That she continues to do all that she does do is little short of a miracle – but it can’t go on forever.

Waiting in the wings is the fatherand-son act of Prince Charles and Prince William.

But how will Charles, soon to be 73, and William, 39, share out their duties – and can they work in tandem?

Charles believes that part of the magic of monarchy is a certain grandeur. He lives with a vast retinue of servants and staff, and maintains at least five separate homes.

He’s made mistakes – the recent resignation of his right-hand man Michael Fawcett in a cash-for-access scandal is a case in point. Fawcett remains the Prince’s Achilles’ heel.

Charles’s “black-spider memos” to ministers. Many feel his role should remain non-political – but evidently he doesn’t .

William, on the other hand, has so far avoided controversy.

Certainly after his marriage there were complaints he was work-shy. But though he lives in suitable style at Kensington Palace and Anmer Hall, we hear nothing of extravagance. He has two homes, not six. His personal staff is a fraction of his father’s.

From his mother Princess Diana he inherited a rather different view of where the Royal Family should stand and so we can expect there will be differences, if not strains.

As the old song has it, “There may be trouble ahead.”

But let’s hope not.