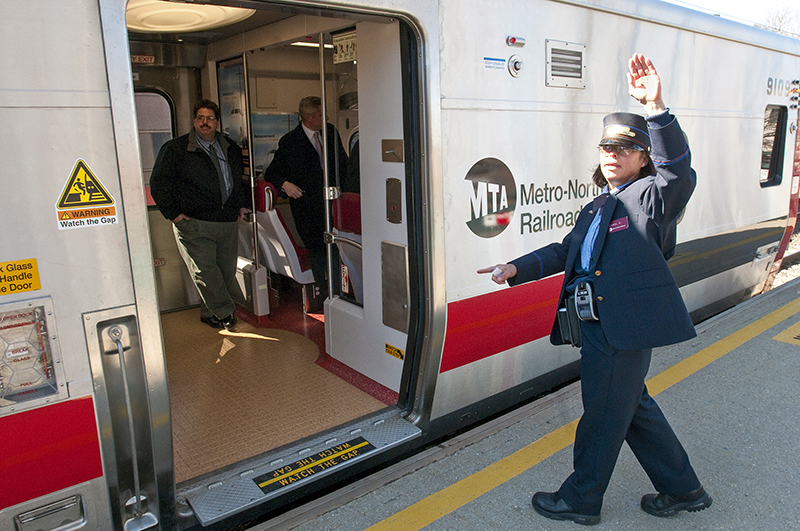 Few markers of the COVID-19 pandemic were as dramatic as the drop in railroad ridership. On Metro-North Railroad’s New Haven Line, normally one of the busiest in the country, the number of people taking the train in mid-2020 dropped by more than 90%.

So in what could be an indicator that the state is reaching an accommodation with the still-active virus, the New Haven Line reached its highest single-day passenger count, 81,308, on June 14, since the pandemic began more than two years ago. It was nearly matched the next day, when 80,404 riders took the train.

While still well short of the pre-pandemic weekday average of about 125,000, the numbers are trending in the right direction.

“Are we coming back? The answer is yes,” said state Department of Transportation Commissioner Joseph J. Giulietti in an interview last week.

He did caution that the June 2022 numbers are a bit misleading, because June 14 and 15 were a Tuesday and a Wednesday. In the new world of hybrid work schedules, the big commuting days are mid-week.

The Connecticut Mirror is a nonprofit newsroom. 88% of our revenue comes from readers like you. If you value our reporting please consider making a donation. You’ll enjoy reading CT Mirror even more knowing you publish it.

Get CT Mirror briefings with enterprise reporting, investigations and more in your inbox daily.

Processing…
Success! You’re on the list.
Whoops! There was an error and we couldn’t process your subscription. Please reload the page and try again.

Giulietti said his department first noticed the uptick in ridership on weekend trains, which he thinks were carrying folks who were tired of staying home and missed the bright lights of Broadway, among other New York attractions.

Then, he said, many companies that initially had their employees working remotely began asking the workers to come in two or three days a week. Those days, he said, tended to be mid-week, hence the mid-week bump.

As riders return, Giulietti hopes to treat them to a (slightly) faster ride to New York. A year ago, Gov. Ned Lamont announced a plan, Time for CT, that among other things promised to shave 10 minutes off the trip from New Haven to New York this year and 25 minutes off the ride by 2035. Giulietti said he expects to meet that goal when new schedules are released later this year, thanks mostly to roadbed improvements.

Upgrading the present system will most likely be the wave of the future for Connecticut rail.

Over the past decade or more, a variety of concepts have been put forward about revamping rail travel in the state, from a second deck along the shoreline route for high-speed trains to a rail tunnel under Long Island Sound.

Giulietti said while these options are still on the table, his immediate concern is bringing the existing system up to a state of good repair and, by doing so, getting as much speed out of it as is safely possible. As has long been reported, the state under-funded its rail system for decades, resulting in what Giulietti calls “piecemeal maintenance.” Trips got slower, delays became more frequent and 19th-century swing bridges began to fail.

“Amtrak is extremely frustrated by Connecticut. We are their slowdown zone,” said Giulietti.

There have been improvements in recent years. Perhaps the most obvious was the creation of the Hartford Line in 2018, service from New Haven to Hartford and Springfield. Ridership on the Hartford Line has come back well, Giulietti said, reaching 45,185 riders in May, 73.2% of its pre-pandemic ridership.

The DOT has a study in progress that is examining the plausibility of electrifying the Hartford, Danbury and Waterbury lines, which would open those routes to the electric-powered M8 cars. Additionally, the department is in the design phase of double-tracking the Hartford Line north of Hartford and hopes to go after federal funds for the project in the next few years, said department spokesman Josh Morgan. Double-tracking would allow more trains to run on the line, he said.

A few weeks ago, the DOT began running M8 cars on Shore Line East, the service from New London to New Haven and Stamford. Giulietti said he hopes the new equipment — faster and cleaner — will attract more riders.

As to the future, one idea under discussion — still an idea, but an enticing one — is a tunnel to replace the sharp “S” curve in Bridgeport, where trains must slow to 30 mph.

Improvements such as a Bridgeport tunnel will take considerable folding green. But funds are coming. The $1 trillion federal infrastructure bill signed by President Joe Biden last winter committed $66 billion to rail improvements, including $30 billion for the Northeast Corridor and $6 billion for Amtrak.

Giulietti said that, and the state’s commitment to match federal funds, constitute the largest investment in rail in his more than 50 years in the rail industry.

This reporting was made possible, in part, through generous support from Robert W. Fiondella and the Fiondella Family Trust.

Free to Read. Not Free to Produce.

The Connecticut Mirror is a nonprofit newsroom. 88% of our revenue comes from readers like you. If you value our reporting please consider making a donation. You’ll enjoy reading CT Mirror even more knowing you publish it.