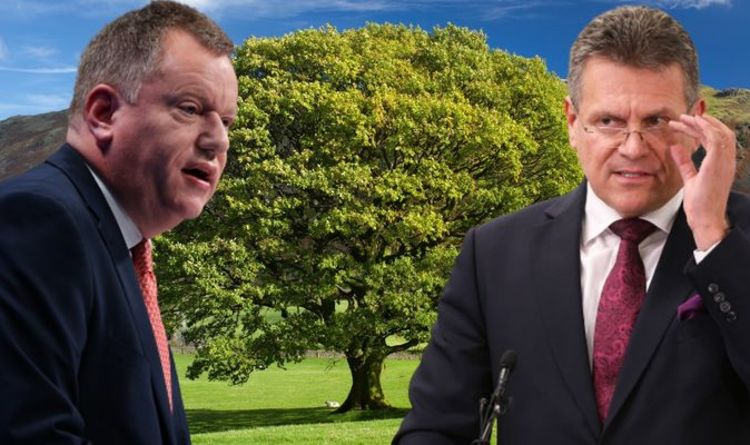 The UK’s chief negotiator had proposed a system whereby goods remaining in Northern Ireland could be treated differently to those moving to the Republic. However, Mr Sefcovic rejected the proposal on Sunday. He also claimed the EU cannot undo Brexit despite threats to trigger Article 16.

Lord Frost has lambasted opposite number Mr Sefcovic over the EU’s refusal to allow the transportation of English oaks to Northern Ireland to be planted in honour of the Queen’s Platinum anniversary next year.

Fuming, Wokehater said: “And how are the EU going to stop us? They can’t get it in their thick skulls that NI is part of the UK, so just ignore them anyway and plant the oaks.”

Adding to the argument, Shamrock said: “Irish oak saplings are being sown all over NI, soon won’t be any space left for English ones anyway.”

READ MORE:
Netherlands cashing in on Brexit as ‘£461million’ created

Another said English oaks would not survive in certain soil.

JL77 said: “English oaks would not go anywhere near their single market, they wouldn’t survive the bitter soil.”

Some people have started to call time on the negotiations, saying the EU are not playing fair.

Malt said: “Just call it a day. We tried but they don’t want to play fair, so let’s just stop beating a dead horse and cut the reigns..No NIP, No Agreement.”

They added: “The EU can do what it likes about a border between NI and Ireland, their issue, their problem, for us we need to be putting the NI as part of the rest of the UK first not keeping on trying to appease the EU. [sic]”

One reader believes the EU is trying to divide the UK with their actions.

Ridusofeu said: “They have absolutely no intention of doing a deal if it involves giving up control over trade between the UK and NI. They are firmly latent on annexing NI from the UK as a punishment.”

Speaking of the red-tape Brussels has applied to the UK in a post-Brexit era, Miserablereader said: “The oak tree issue is a classic example of EU petty bureaucratic interference with an independent sovereign nation, simply because they feel they can.”

Magical Merlin said: “It’s abundantly clear the NIP will never work no matter how many ‘tweaks’ are made. Having a foreign entity have any jurisdiction over another’s land will always end in tears.”

5X was angry at the lack of action by the Prime Minister.

They said: “Tick tock tick tock more time goes by and still nothing is achieved, stop this pathetic game and trigger Article 16… We need a PM that will fight for the UK not bending over for the EU. [sic]”

Others agreed with the idea of ending the talks.

Methuselah said: “The solution is Article 16.”

As did avoicenotallowedtospeak, writing: “It is time to trigger Article 16. Tear up the WA and move to WTO trading. Let us do BREXIT properly.”

Negotiations are still ongoing between the EU and the UK over the fine-tuning of the Northern Ireland agreement.