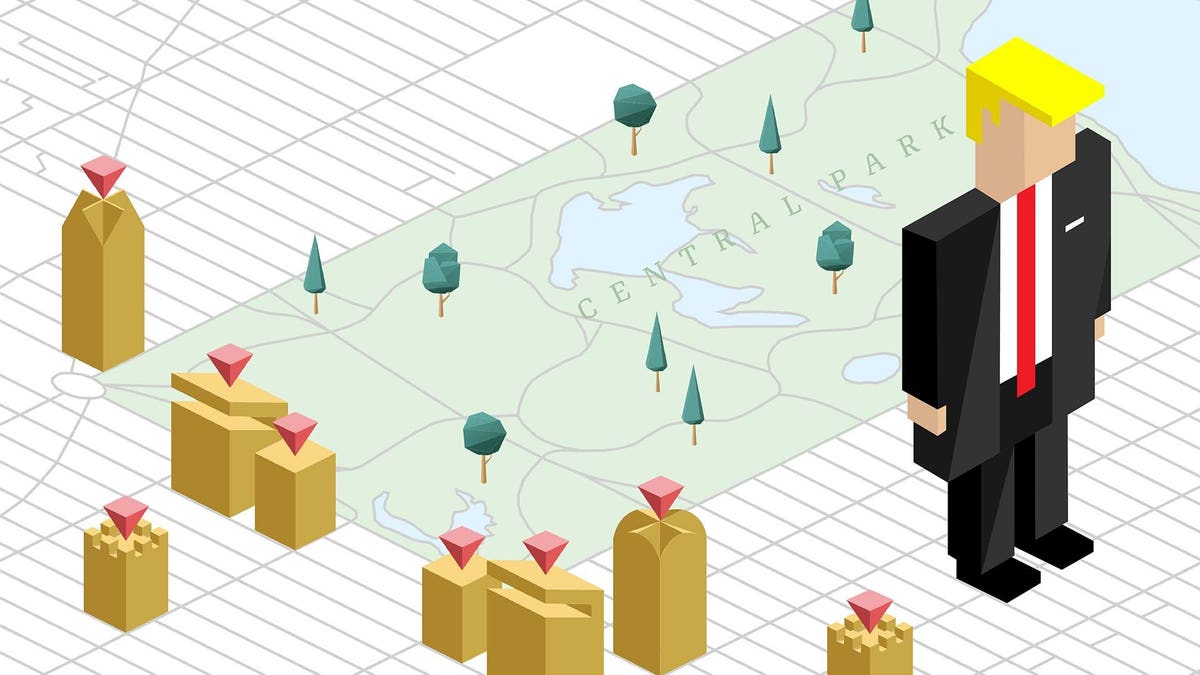 On the corner 59th Street and Park Avenue in midtown Manhattan stands a beautiful building named Trump Park Avenue. Once known as the Hotel Delmonico, it features arched windows, marble finishes and penthouses that have sold for upwards of $20 million. Donald Trump still owns a handful of units, including one that Jared Kushner and Ivanka Trump used to call home.

Recently, however, the property has lost some of its luster. The reason: Its storefronts went quiet during the pandemic. The parent company of New York Sports Clubs, which operated a gym in the building, closed its locations in March 2020, then declared bankruptcy six months later. Capital One, which was paying an estimated $1 million a year to lease space next door, left in May 2020, about a year and a half before its lease expired.

Like a lot of real estate owners, the former president has struggled to keep his commercial spaces humming in the Covid era. Heading into the pandemic, Trump had over 30 retail tenants in New York City. About a quarter of them either have left their properties or shut down their operations, according to a Forbes review.

A few blocks from Trump Park Avenue, GNC closed down its Trump Plaza location, for which it paid an estimated $400,000 in annual rent. A spokesperson for the Trump Organization says a new business will be opening soon. Data connected to the loan on the property shows that revenues have already dropped 23% from their pre-pandemic levels, causing profits to tumble 43%.

Starbucks used to have a bustling location inside Trump Tower, complete with a signed photo of Ivanka Trump kissing a coffee cup. The space was roped off on a recent visit, and the store finder on Starbucks’ website no longer shows a location inside the building. A representative for the Trump Organization claims Starbucks is still paying rent, but the outlook doesn’t look good. An employee answering the phones at the Trump International Hotel in Washington, D.C. said the coffee company had closed its location there, too.

Teresa’s Brick Oven Pizza and Cafe, 1290 Avenue of the Americas

Not far from Trump Tower sits 1290 Avenue of the Americas, a massive skyscraper in which Trump owns a 30% interest alongside publicly traded Vornado Realty Trust. The former president doesn’t handle day-to-day management of that property, but he does collect money from it. So it wasn’t good news for him when it lost three of its retail tenants—Teresa’s Brick Oven Pizza and Cafe, Earl of Sandwich and Barilla Restaurant. It’s tough to run a midtown Manhattan lunch spot when so many workers are staying home.

Trump and Vornado are also partners at 555 California Street in San Francisco, another large office building. A ratings report published in April said the number of people entering the property dropped from roughly 5,000 to 200 during the pandemic. A handful of tenants—including Boys’ Deli, Bay Club and Proper Food—asked for rent relief, according to the report.

There are signs of a comeback. At Trump World Tower, on the east side of Manhattan, the World Bar shut down, but a notice posted to the door in August said that something called “Pure Beef Inc.” was applying for a liquor license. A spokesperson for the Trump Organization says the space has been leased, and construction should start soon. Downtown, an Italian bistro named Nerolab is preparing to open a space in Trump’s 40 Wall Street.

Gucci, the former president’s most important tenant, pays an estimated $24 million a year in rent and reportedly reupped its lease in 2020. Its previous deal wasn’t set to expire until 2026, so the retailer may have gotten a discount by renegotiating early.

Around the corner from the Gucci store sits Trump’s second-most important retail outpost, 6 East 57th Street. Nike rented that space for decades, paying an estimated $16 million annually, before moving out a few years ago and subleasing to Tiffany. The jeweler is expected to vacate in 2022. That might leave the former president looking for a new tenant at a time when retail real estate is still limping back from the pandemic.