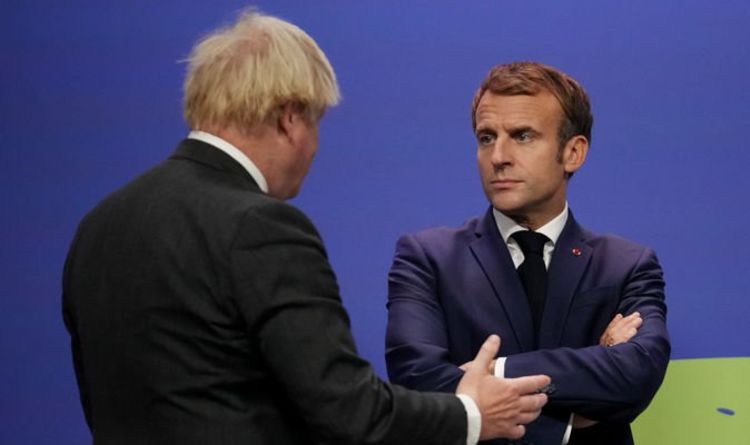 The Prime Minister sent Mr Macron a letter on Thursday outlining the UK’s proposals for resolving the issue in the hope of discovering some common ground ahead of a meeting between European leaders on Sunday. But the letter had the opposite effect, with the French President complaining that Mr Johnson demonstrated he was not “serious” by publishing it on Twitter.

He disinvited Home Secretary Priti Patel from the meeting in retaliation.

The meeting was called after 27 migrants drowned while attempting to cross the Channel from France to Britain in a dinghy on Wednesday.

The group included seven women – one of whom was pregnant – and three children.

Brexiteer MP Sir Redwood has insisted that the EU should be playing a greater role in resolving the issue, and preventing further deaths, noting that migrants should not be travelling as far as Calais, France, in the first place – never mind across the Channel.

He argued that if migrants are travelling through a number of safe EU countries to arrive in France, the bloc is already falling short of its responsibilities.

In a post on Twitter, Sir John wrote: “High time the EU sorted out how so many illegal migrants end up at Calais from various safe countries.”

He added: “The EU needs to end so many camping in the cold in North France.”

French officials have been accused of choosing to point-score rather than respond to the idea in good faith, arguing that Britain is attempting to adapt EU measures despite Brexit.

They referred to the ‘Dublin agreement’ on the relocation of asylum seekers.

But Bow Group Chairman Ben Harris-Quinney told Express.co.uk that it was right such agreements were “torn up from a UK point of view” and replaced by domestic laws and agreements “that reflect the wishes of the public on immigration”.

At the meeting between European leaders, minus Ms Patel, France also appeared to pass the buck for resolving the issue to Britain.

French Interior Minister Gerald Darmanin said that Britain must be “responsible” by making the country “less attractive for migrants”.