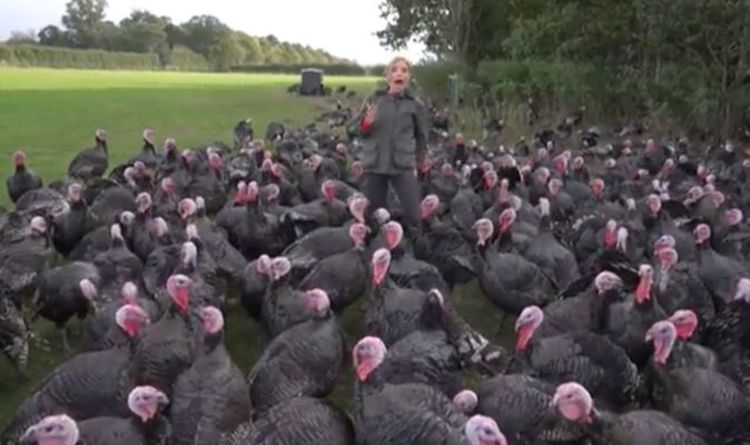 CNN’s Anna Stewart visited KellyBronze turkey farm in Essex but was less than pleased with the unfriendly turkeys when one pinched her bum live on air and others made giggling noises in response. In the video, the CNN reporter can be heard saying: “Ow! That really hurt that really got my a***.”

The reporter posted the incident on her Twitter account where fans were able to see Ms Stewart jump in shock, then burst out laughing.

Following her, many other turkeys joined in and made a sound that could have been giggling.

Ms Stewart captioned the Tweet: “Turns out what turkeys REALLY like is a good laugh, at my expense. Sound up…

“No shortage of outtakes today at @KellyBronze Farm.”

“Hilarious – I rarely laugh out loud to these things but I did at this one!” Twitter user Nick Dowler commented.

Ms Stewart’s hilarious interaction with the cheeky turkey comes amid fears Christmas dinner may look different this year compared to previous years due to shortages.

It is estimated there will be a 20 percent shortage of turkeys this festive season as some stores are already seeing an increase in sales.

Sales of frozen turkeys increased by 409 percent in September in comparison to the same month last year, supermarket Iceland has revealed.