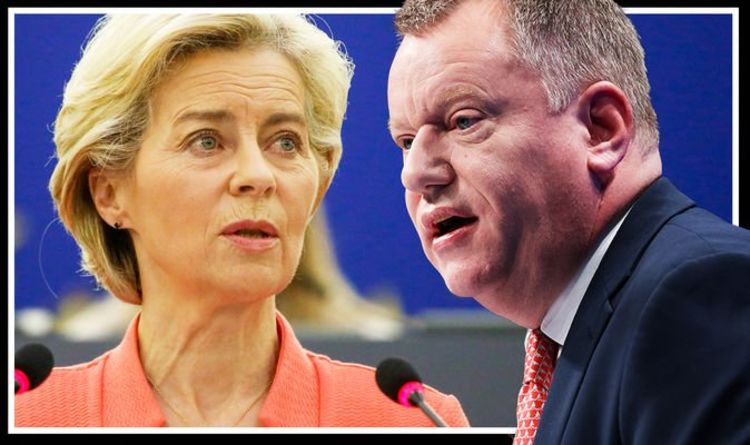 The EU is expected to produce plans to resolve issues with the Protocol on Wednesday as well as respond to Lord Frost’s command paper which calls for significant changes to be made to the Brexit deal for the region.

Commission chiefs are expected to propose that chilled meats can continue crossing the Irish Sea from Britain after the end of the current grace periods, in a move to alleviate the so-called sausage wars.

But Lord Frost will use the speech in Lisbon to warn that compromises must go far further than this to address issues such as the role of the European Court of Justice in Northern Ireland.

He will say: “The EU now needs to show ambition and willingness to tackle the fundamental issues at the heart of the protocol head-on.

“The Commission have been too quick to dismiss governance as a side issue.

“The reality is the opposite.

“The role of the European Court of Justice in Northern Ireland and the consequent inability of the UK Government to implement the very sensitive arrangements in the protocol in a reasonable way has created a deep imbalance in the way the protocol operates.

“Without new arrangements in this area, the protocol will never have the support it needs to survive.”

Lord Frost will also this week share a new legal text with the European Commission to propose the “foundation” for a new protocol to support the Good Friday Agreement.

The Brexit minister also made clear that the UK-EU relationship was “under strain”.

However, he stressed: “But it doesn’t have to be this way.

“By putting the Protocol on a durable footing, we have the opportunity to move past the difficulties of the past year.”

On Saturday night, the UK Government also indicated it would trigger the safeguard clause in the Brexit deal governing Northern Ireland if the EU’s offer was not sufficient.

A UK Government source said the UK would trigger Article 16 of the Protocol – effectively overriding parts of the deal.

The source added: “The real question now is whether the EU are prepared for the scale of changes needed.

“We will look carefully and constructively at whatever proposals the EU bring forward.

“Our negotiating teams are ready to work intensively and rapidly to try and find a solution, and we expect to be doing so very soon.

“The prize on offer is a stronger UK-EU relationship which is focussed on the future.”

The Protocol effectively keeps Northern Ireland in the EU’s single market for goods, but as a result has imposed a trade barrier on products crossing the Irish Sea from Great Britain.

Unionists want Prime Minister Boris Johnson to tear it up, a move he has so far resisted as the Government presses for a renegotiation with Brussels.