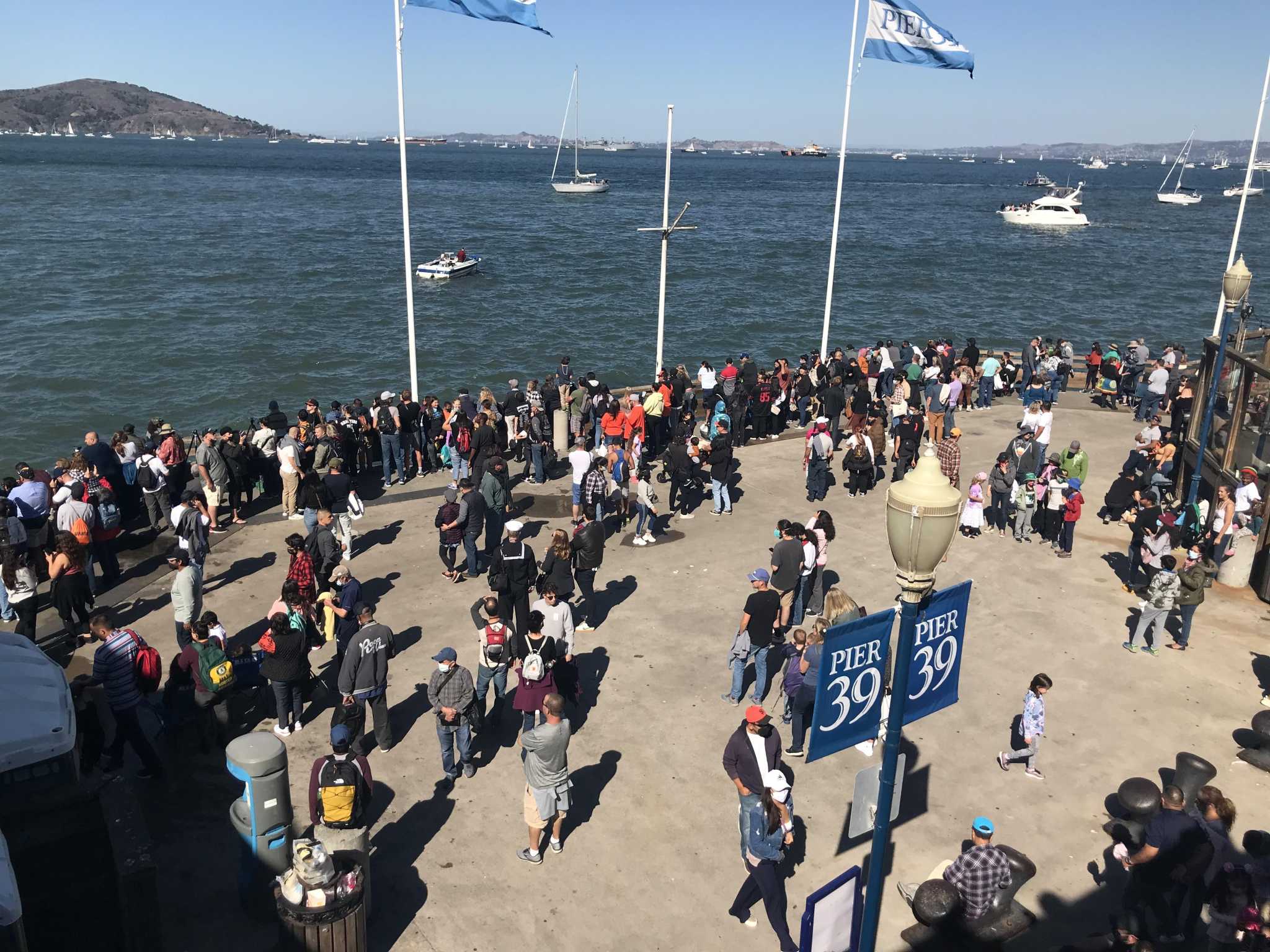 Muni buses, streetcars, boat trams, ferries and water taxis were filled with people hoping to secure prime vantage points to view the the Blue Angels air show. On the Embarcadero in San Francisco, cars sat in stop-and-go traffic as dense crowds walked along the waterfront.

Tens of thousands of people flocked to San Francisco on a bright and sunny Saturday to watch the Blue Angels air show and the Giants’ playoff run, bringing some of the most visible evidence that the city is pushing toward the tail end of a pandemic that quieted its vibrant northeastern core.

And while the day’s festivities brought crowd sizes not seen since before the pandemic, predictions of intense traffic also bore out.

Westbound traffic on the Bay Bridge was snarled in congestion most of the day, and car and foot traffic was so dense on the Embarcadero and other parts of the city that it temporarily disrupted some Muni lines and cable cars.

Carolyn Moore and her family of four were spared by the traffic, opting to take the San Francisco Bay Ferry from Oakland to the Ferry Building. Her children, twins Sol and Wren, marveled at the crowd at Pier 39.

Darryl Johnson, 60, and his wife and son also opted to ferry into the city, from Vallejo, to watch the Blue Angels in action. “Ooh,” Johnson said when he saw an aircraft near the Golden Gate Bridge spin around acrobatically before descending at a low altitude.

“I might have a heart attack before I leave here,” Johnson said.

Like other large public events, Fleet Week was suspended during the pandemic, meaning it’s been almost two years since Johnson had been able to take his 9 year-old son to watch the spectacle.

“We used to come all the time,” Johnson said, “but now that he’s older he can understand a lot more.”

Gene and Leland Finch watched the show on a shaded area near the Pier 39 shoreline after enjoying clam chowder bread bowls by the Bay. Saturday was the most packed outing they’d attended since the start of the pandemic.

The couple, married for 60 years, rode into the city from Pleasanton in the early afternoon taking BART. Gene said she “started feeling a little uneasy” about the crowd sizes once they boarded the Muni F-line bus shuttle that was packed to the brim with people riding to the show.

Still, after not traveling anywhere during the pandemic, Leland Johnson felt something he hadn’t felt in almost two years: normalcy.

“I’ll tell you what I like the best (about today),” Leland Finch, 80, said. “Being able to see people enjoy themselves, because they haven’t had the opportunity. … It’s good to just see people smiling and laughing and joking and just having a good time. That means a lot to me.”

The Fleet Week air show continues on Sunday while the Giants will have the day as they travel to Los Angeles for the third game of the playoff series.