After a difficult 18 months, which saw many workers putting in 12-hour shifts and mandatory overtime to meet pandemic demand, employees are in no mood to compromise.

(Omaha, Neb.) — A summer of labor unrest at U.S. food manufacturers has stretched into fall, as pandemic-weary workers continue to strike for better pay.

Around 1,400 workers at Kellogg Co.’s U.S. cereal plants — including 380 at the facility in East Hempfield Township, Lancaster County —  walked off the job this week, saying negotiations with the company over pay and benefits are at an impasse. Meanwhile, in Kentucky, a strike by 420 workers against Heaven Hill Distillery is in its fourth week.

The actions come on top of strikes earlier this summer by 600 workers at a Frito-Lay plant in Topeka, Kansas, and 1,000 workers at five Nabisco plants across the U.S. In June, Smithfield Foods narrowly avoided a strike by thousands of workers at a plant in Sioux Falls, South Dakota.

The number of actions is unusual. Kellogg says this is the first time its U.S. cereal workers have gone on strike since 1972. Nabisco workers last walked off the job in 1969.

But after a difficult 18 months, which saw many workers putting in 12-hour shifts and mandatory overtime to meet pandemic demand, employees are in no mood to compromise.

“We’re drawing a line in the sand,” said Rob Long, a production mechanic who has worked at Kellogg’s Omaha plant for 11 years. Kellogg workers are also striking in Michigan, Pennsylvania and Tennessee. 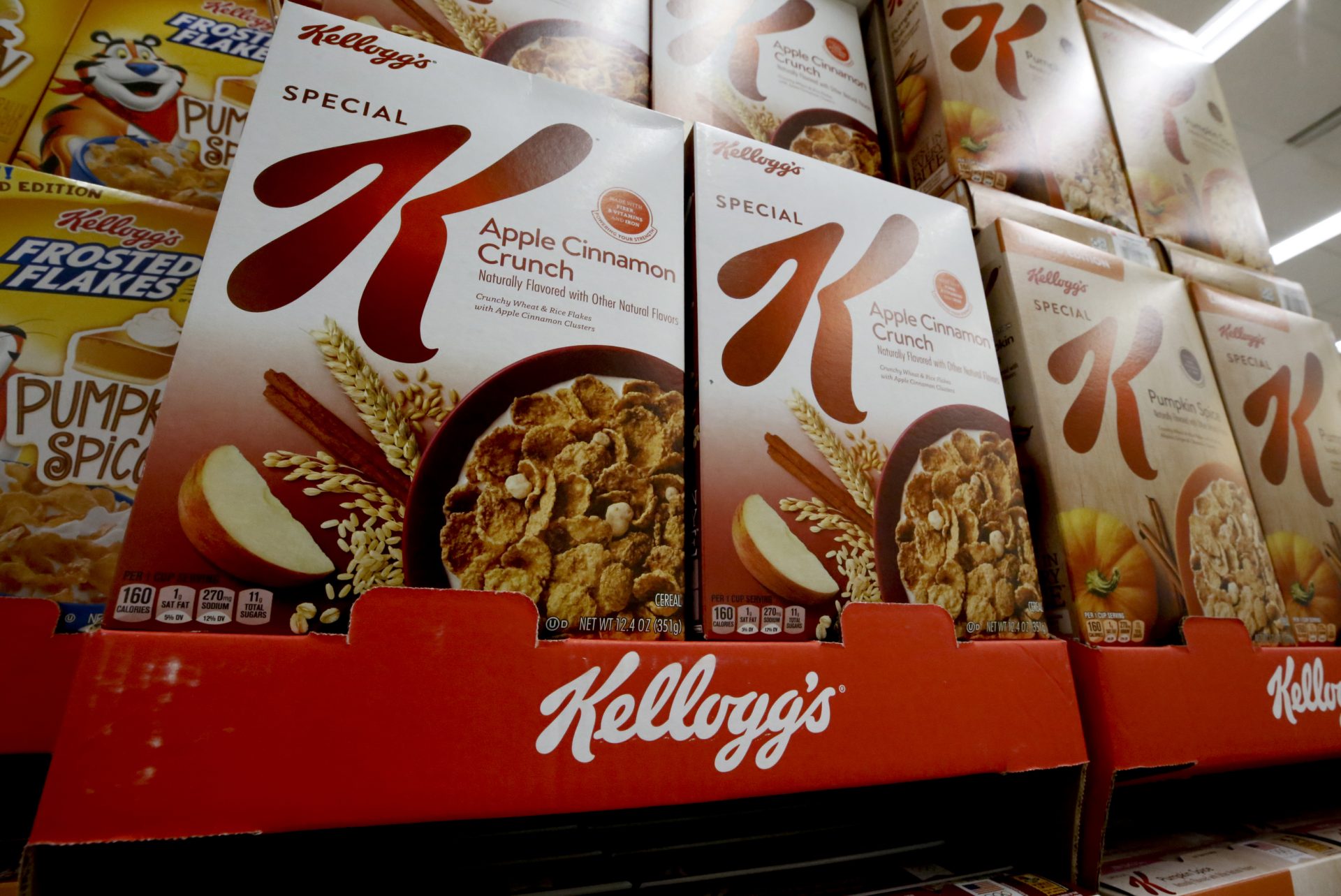 In this Aug. 8, 2018, file photo boxes of Kellogg’s Special K cereal sit on display in a market in Pittsburgh.

Long said he and others are upset about a two-tiered system of employees that gives fewer benefits and less pay to newer workers, creating a wedge within the ranks. Long said the company wants to get rid of a provision that currently caps the lower tier of workers at 30% of the workforce.

After decades of watching companies chip away at pay and benefits, food workers sense that they have a rare upper hand in the wake of the pandemic, says Patricia Campos-Medina, the executive director of The Worker Institute at ILR Cornell.

Labor shortages mean companies can’t easily find replacements for food-production workers, she said. And the pandemic put a spotlight on the essential __ and sometimes dangerous __ nature of their work.

“Workers in general are demanding that companies invest more in the workforce and not just use the profits for the shareholders,” she said.

Campos-Medina said the trend is not only happening with unionized workers like those at Kellogg, who are members of the Bakery, Confectionery, Tobacco Workers and Grain Millers Union. Non-union fast food workers have walked off the job in dozens of U.S. cities seeking a $15 minimum wage. And workers at three Starbucks stores in Buffalo, New York, are trying to unionize.

The strikes come as food companies are still trying to get back to normal levels of production. Kellogg’s cereal sales had been anemic for years, for example, as families shifted to portable breakfast items like nutrition bars. But when schools closed and kids were home last year, U.S. cereal sales shot up 7%. So far this year, they’re down 7.7%.

Kris Bahner, Kellogg’s senior vice president for global corporate affairs, says the company’s compensation and benefits are already among the industry’s best. The company, which is based in Battle Creek, Michigan, says its longer-term employees made an average of $120,000 last year and $118,000 in 2019, and its proposed contract would shift newer workers to those higher wage rates over six years.

“We are disappointed by the union’s decision to strike,” she said. Kellogg began negotiating a new four-year contract on Sept. 8.

But workers on the picket line in Omaha say they’re routinely working 74- to 84-hour weeks to earn that money. Some workers said they’ve endured 12-hour shifts seven days a week throughout the pandemic, with only a few minutes’ notice about mandatory overtime.

“We do make good money, but we’ve given up a lot,” said Dan Jourdan, a packing machine operator who has worked at Kellogg since 2001. “If we worked just 40 hours a week, we’d make nowhere near that kind of wage.”