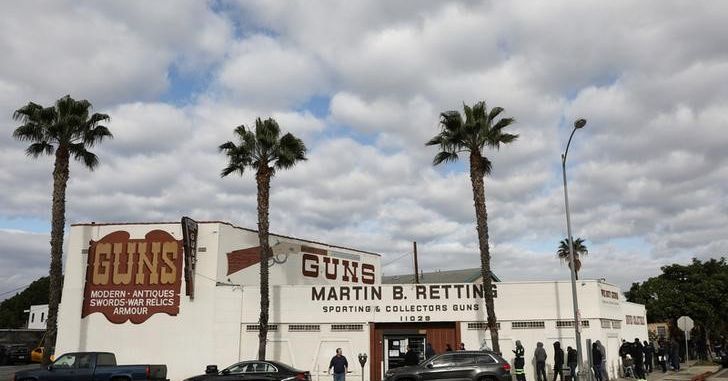 People wait in line outside to buy supplies at the Martin B. Retting, Inc. gun store amid fears of the global growth of coronavirus cases, in Culver City, California, U.S. March 15, 2020. REUTERS/Patrick T. Fallon

(Reuters) – A federal appeals court on Wednesday indicated it may avoid ruling on the constitutionality of a California county’s forced closures of gun shops early in the COVID-19 pandemic and send the case back to a trial judge for further consideration.

During oral arguments, several members of an 11-judge panel of the 9th U.S. Circuit Court of Appeals in Pasadena asked if a better factual record needed to be developed before it could fully assess Ventura County’s COVID-19 public health orders.

The case was dismissed before any evidence was developed regarding how anyone’s rights under the U.S. Constitution’s 2nd Amendment were burdened or why the county treated gun stores differently than “essential” businesses that could remain open, some judges said.

“At this stage, we do not need to decide whether the stay-at-home orders burden the Second Amendment,” said U.S. Circuit Judge Mary McKeown, an appointee of former President Bill Clinton.

U.S. Circuit Judge Lawrence VanDyke in January had written for a three-judge panel that the 48-day closure in March 2020 of gun shops, ammunition shops and firing ranges to curb the spread of COVID-19 violated the rights of would-be gun owners.

But VanDyke, an appointee of former Republican President Donald Trump, in an unusual concurring opinion to his own ruling, acknowledged most judges in the circuit would disagree with him and outlined an alternative opinion that could be used to uphold the case’s dismissal if the court took the case en banc.

It did so in March, leading to Wednesday’s arguments before a panel consisting of seven judges appointed by Democrats and four by Republicans, two of whom had joined VanDyke in the three-judge panel decision.

Raymond DiGuiseppe, a lawyer for the plaintiffs, said the issues were the same as in recent U.S. Supreme Court decisions favoring churches challenging pandemic-related bans on indoor services.

“Much has happened since the start of the pandemic, but one thing is and remains constant: The government cannot suspend the exercise of constitutional rights,” DiGuiseppe said.

U.S. Circuit Judge Michelle Friedland, though, questioned “if the implication of your argument is that a public health emergency could just never have a shutdown order.”

Nate Raymond reports on the federal judiciary and litigation. He can be reached at nate.raymond@thomsonreuters.com.