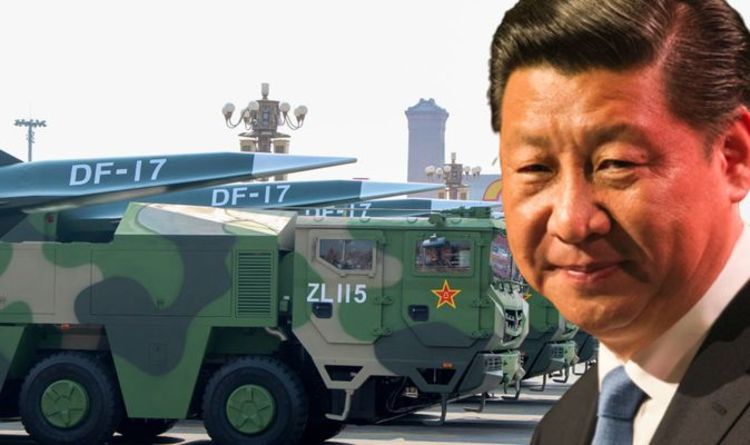 The missile was fired from a vessel from space, itself already travelling at hypersonic speeds, leaving US experts unsure as to how China was able to actually conduct the test. Though the test happened in July and was reported closer to the time, the nature of the breakthrough has been revealed in a new report from the Financial Times.

The paper reported that experts have been poring through data in an attempt to understand how China was able to build the technology – as well as what exactly the missile was intended to do.

In the test, China first launched what it calls a hypersonic glide vehicle (HGV), which is sent into space mounted on board a rocket, before re-entering the atmosphere and flying at its target more than five times the speed of sound.

HGVs can work as weapons on their own since they are travelling so fast, but China is also said to be using them as ways of carrying other missiles.

The HGV was then able to launch a separate missile, which detached in the atmosphere over the South China Sea, according to the report.

It doesn’t seem to have been sent towards a target and instead fell into the water, which only adds further confusion for US experts.

That makes it harder to know what the missile might have been created to do.

Some reports suggest that it might be used to destroy missile defence systems.

While Russia and the US have been working on similar technologies of their own, the successful test has added to fears that China is in front of both.

Tension has been mounting as the Indo-Pacific region ramps up military capability following the announcement of a joint US/UK/Australian nuclear submarine programme, also known as the AUKUS deal.

China has openly admitted that it is willing to use force if necessary to implement its one-China policy and reclaim the island of Taiwan as its own.

In a recent meeting between US President Joe Biden and China Premier Xi Jinping, Beijing frankly warned Washington “not to play with fire” when it came to Taiwan.

Further afield, North Korea has also started testing similar weaponry in an attempt to demonstrate self-sufficiency in its defence doctrine.

With Russia also successfully testing such weapons, a multi-global network of equipment is fast becoming part of national military hardware, suggesting the future may depend on ‘rapid reaction’ or ‘rapid pre-emptive’ capabilities.

The security dilemma suggests that the use of a nuclear weapon will remain highly unlikely in the future, hence the testing of new more conventional weapons, such as missiles, maybe a more ethical deterrent.

The current focus of the global arena appears to be shifting from West Asia to East Asia, yet multiple frontlines are still present across the world, with NATO actively involved on the Eastern front of Europe in Ukraine and Poland, and Western powers highly concerned over intentions of various actors in the Middle East.

With China, the US, Russia and North Korea now leading the way in new technology, military experts will focus their attention on the results of such tests, and more importantly examine the rationale and intention behind the use of such equipment, no matter how mundane the explanations may be.