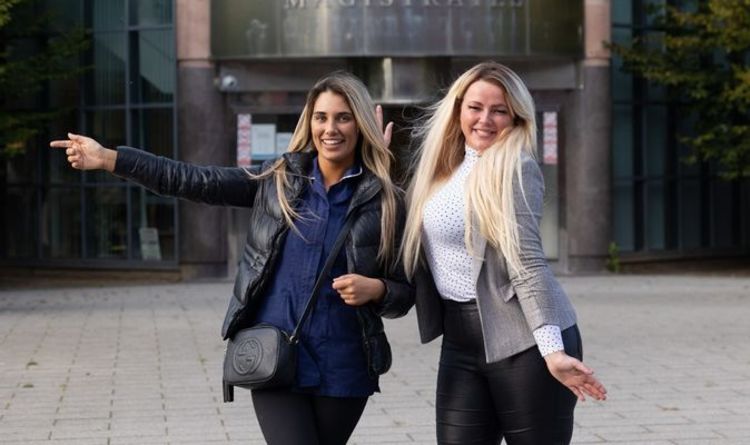 Kelsey Ridings tested almost four times the legal alcohol limit following the incident in Greater Manchester, when her Mercedes sports car with four children inside was involved in a collision with another vehicle. The 26-year-old then left the scene before police could attend the collision, after swapping details with the driver of the other vehicle.

But she was later traced to her home in Mottram, near Hyde, Greater Manchester by officers who breathalysed her.

An initial breath test conducted by the force showed she had 124 micrograms of alcohol in 100 millilitres of breath. The legal limit is 35mg.

At a hearing at Tameside Magistrates’ Court in Greater Manchester she was cleared of charges.

The court heard she consumed two pints containing vodka in just 15 minutes at a friend’s house to “calm herself down” after the crash, before she was given a lift home.

Magistrates delivered a not guilty verdict as prosecutors had failed to prove their case “beyond reasonable doubt”.

After the verdict, Ms Ridings celebrated outside the Manchester court with her best friend Paige Azad, whose house she went to after the crash.

The incident which saw Ms Ridings’ C250 car hit a black Peugeot 308 took place on May 6 this year.

Kelsey Ridings was returning home from a shop she had been considering renting as a beauty salon before colliding with Carl Kidd, who was driving the other vehicle.

“She got out and abruptly walked over to my car. I said: ‘look what you have done?’ and asked for her insurance details but she offered me £1,000 to not go through the insurance.”

Officers arrived at Ridings’ home an hour after the crash, the court heard.

After blowing almost four times the limit on the first test, she took a second test which showed she had 82mg in breath.

The accountant told the court she had left the scene and headed to her friend Paige Azad’s house because “other cars were beeping” and her children were “screaming”.

She also accused Mr Kidd of acting “aggressively” towards her.

She said: “I got into the car and drove off to Paige’s. Everything was happening too fast and the kids were hysterical.

“At Paige’s I was panicking and asked her to get me a strong drink. I just needed to calm my nerves and I stood outside her house having a glass of vodka which was more or less neat and I then necked it then had another one whilst I was getting the kids out of my car and into my friend’s van.”

Breaking down in tears, she added: “I just feel like a bad mum drinking. I was there 15-20 minutes and it was long enough to have two drinks. I just panicked. They were incredibly strong drinks. I had not had a drink before it.”